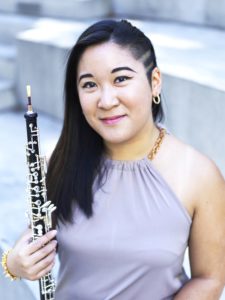 Oboist Victoria Hiromi Doo Lee is a musician based in Orange County whose versatility has led to numerous performances in all types of venues, from appearing with chamber groups at aquariums and art museums in California and touring as a soloist in France, Germany, Austria, and Switzerland, to performing in unusual projects such as the New York Philharmonic’s innovative “Philharmonic 360” program at the Park Avenue Armory, which featured Karlheinz Stockhausen’s surround-sound masterpiece Gruppen.
Victoria began her studies with Lisa Patanella, Dr. Jonathan Davis, and Ariana Ghez while at the Orange County School of the Arts. After moving to New York for college, her career escalated quickly as both a classical and contemporary musician. A typical season would include early Renaissance double reed band music with the New York Kammermusiker, performing with the New York Youth Symphony as principal oboe, and premiering works such as Mohammed Fairouz’s opera Sumeida’s Song.
Her passion for teaching began in college when she was appointed as the Manhattan School of Music’s MSM Sundays oboe instructor, a program designed to provide private lessons to amateur musicians in New York City. In the same year, she was invited to teach with the MSM Distance Learning Center and maintained a small private studio via video calling for high school students in the cities of Norfolk and Stanton, Nebraska. Since sparking her career as an educator, Victoria has taught with Bocal Majority double reed summer camps in Northern and Southern California and represented the organization at several double reed and music education conferences. She is a regular guest speaker for the Southern California School Band and Orchestra Association (SCSBOA), presenting seminars on oboe pedagogy at their annual professional development convention.
Victoria is a member of the resident wind quintet with the Taneycomo Festival Orchestra, located in Branson, MO, whose mission is to re-popularize classical music by performing in unexpected and surprising locales. In addition to regular performances, the members of the Taneycomo Winds share a common passion for both collaboration and education, and often contribute to multi-media projects with the White River Artists Alliance or present programs for children at the local library.
Victoria holds a BM in Classical Oboe and MM in Orchestral Oboe Performance from the Manhattan School of Music where she studied with Liang Wang. Currently in her fifth season serving as the principal chair of the Santa Monica Symphony, Victoria is also on the faculty of Orange Coast College, the French Art Studio of Pasadena, Irvine Valley College, Fullerton College, and the Orange County School of the Arts’ prestigious Frederick Fennell Wind Studies program. Victoria is a founding member of Syrinx Quintet, an esteemed reed quintet in Southern California that won the 2019-2020 Beverly Hills National Auditions. She also coaches at many local middle and high schools. An active freelance oboist in four Southern California counties, she resides in Huntington Beach, maintaining her career as an in-demand performer, clinician, and private teacher.