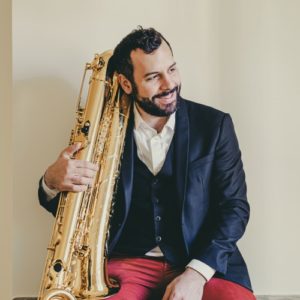 After brilliant studies at the Cergy-Pontoise (with Jean-Yves Fourmeau) and Saint-Maur conservatoires (with Nicolas Prost), Nicolas Arsenijevic born in 1988, continued to study with Christian Wirth before being admitted unanimously into Claude Delangle’s saxophone class at the “Conservatoire National Superieur de Musique” in Paris. He has won numerous awards in major competitions. In 2007 he formed the Oblivion Quintet with whom he has given numerous concerts throughout France (Paris, Laval, Alençon). He works regularly with pianist Françoise Buffet. In 2012 alongside pianist Zoltan Peter he played as part of the programming of the Society of Slovenian Composers in  Ljubljana, where he premiered “Visshudi” by Peter Savli, for saxophone and percussion. He has performed as soloist with orchestra on several occasions, notably with the Slovenian String Chamber Orchestra in Ljubljana and with the Chieri Chamber Orchestra in Italy (concertos by Glazunov and Larsson). He has worked under the direction of Philippe Bender, Bruno Mantovani, Fayçal Karoui and Patrick Fournillet. He has performed diverse and varied programs with the CNSMDP saxophone ensemble at “Théâtre du Châtelet”, Paris, in Douai, Vannes, and at the “Younger Hall” in St. Andrews, Scotland. Also a member of Quatu’or Laloi (founded in 2008) a saxophone quartet which excels in a mix of genres including tango, jazz, classical music, contemporary and music from Central Europe and the Balkans.Nicolas Arsenijevic is involved in contemporary premiers and has worked with many composers. World premiers include works such as “Sous l’égide” by Kaija Saariaho, “Translittérations II” by Carlos Castelarnau (April 2013), “Sikuri II” by Juan Arroyo for tenor saxophone and electronics (May 2013). He has developed concert lectures, ”sequence(s)”, with double bassist Florentin Ginot and actor Hervé Péjaudier, mixing Sequenzas by Luciano Berio and Dante’s poems. A member of several chamber ensembles (Quatuor Laloy, the Saxback Ensemble, the Kosmopolitevitch Orkestar, The Oct’opus Ensemble), Nicolas Arsenijevic devotes part of his time to contemporary creation. His work with young composers at IRCAM (Institute for Research and Coordination in Acoustics/Music) and CNSMDP (the Paris Conservatoire) has produced original compositions like Four Bodies in Search of An Author that was created in Paris in 2014. Nicolas Arsenijevic is a Selmer Paris artist and has been a laureate of the Cziffra Foundation since 2013.