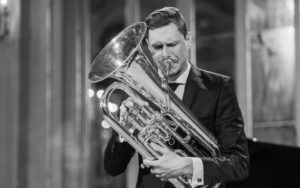 After graduating from the art high school of the Maribor Conservatory, he continued his education at the Academy of Music in Ljubljana and in 2014 with honors and special commendation (Diploma summa cum laude) he completed his master’s degree in the class of Professor Darko Rošker. During his schooling, he participated in national and international competitions and achieved outstanding results (4 gold plaques, 2 first prizes, second prize, third prize, silver plaque). He perfected his knowledge with world-renowned professors such as Øystein Baadsvik, Steven Mead, Thomas Rüedi. He regularly collaborates with the Slovenian Philharmonic Orchestra, the Maribor Brass Band, the Slovenian Philharmonic Brass Ensemble, and the Maribor Conservatory of Music and Ballet Orchestra. As a student, he also collaborated with the symphony orchestra and the Big Band of the Academy of Music in Ljubljana. As a soloist, in 2012 he performed Philip Spark’s Fantasy with the wind orchestra of the Academy of Music. As part of the Ljubljana Music Youth, he performed several solo and chamber concerts throughout his studies.
He is the recipient of the Prešeren Student Award. Since 2013 he has been employed at the Conservatory of Music and Ballet in Maribor, leading the wind orchestra GŠ Center.