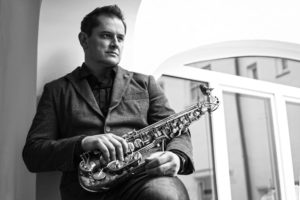 In 1998 he graduated from the University of Music in Vienna. From 2000 to 2003 he studied saxophone in Paris where he obtained his degree in J.Y.Fourmeau’s class (Premier Prix) he then continued his post-graduate studies with Vincent David.
In 2005 he finished his Master’s Degree at the University of Music in Vienna and and got his postgraduate Degree at the Music Academy in Ljubljana in 2007.
As a solo artist he performed with the Symphony Orchestra of University of Music Vienna, Symphony orchestra of the Ljubljana music academy, Slovenian philharmonic orchestra, Slovene national radio symphony orchestra, Orchestra of slovenian composer society, St.George chamber orchestra, Chamber orchestra of the Slovenian philharmonic and with the Orchestra of croatian armed forces. Aside being a solo and chamber music performer, Lev Pupis is also a teacher at the music Conservatory in Ljubljana. In 2018 he became a senior lecturer at the Univesity of music and performing arts in Graz. In 2019 he has become a guest professor for saxophone at the Academy of music in Sarajevo.
Moreover he regulary held masterclasses at Music Universities and summer schools around Europe and in the USA.
As a jury member he has been invited to international saxophone competitions in Slovenia, Serbia, Poland, Croatia and Italy.
More than 20 pieces by modern authors, including solo concertos, chamber trios and saxophone quartets have been written for Lev or the groups he has colaborated with.
He is a member and co-founder of Ensemble “4SAXESS” and the saxophone orchestra SOS. He is the founder of the International Woodwind festival and competition EMONA in Ljubljana and was its artistic leader in 2011 and 2013.
In 2011 he co-founded cultural society Sekvoja, which runs projects such as saxophone orchestras SOS and SOSjunior, international AS saxophone festival in Bled and summer festival ALPSAXSUMMER in Kranjska gora and has been its artistic leader of the company ever since. In 2020 Lev became also the president of the society. From 2015 till 2018 Lev was an elected board member of the International saxophone comitee.
Lev Pupis is a D’addario, Sequoia, LeFreQue and Silverstein artist.