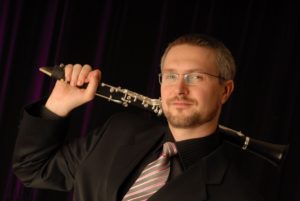 Igor Františák studied at the Conservatory in Ostrava in the clarinet class of Dr. Valter Vítek from 1989–1995, and continued his studies at the art-teaching department of the University of Ostrava. In 2001 he received a government scholarship to study at the Norwegian Academy of Music with Prof. Hans Christian Braein. During his studies he participated in many international seminars and interpretation courses (Michel Arrignon, Eric Hoeprich, Charles Neidich, Christian Leitherer, Milan Etlík, Andrzej Janicki, Wenzel Grund). He has participated in several national and international competitions, winning prizes in the Chomutov Music Competition (CZ) and International Competition “Marco Fiorindo” in Turin (Italy). He has also performed as a soloist with the Janáček Philharmonic, the Bohdan Warchal Slovak Chamber Orchestra, the Kurpfälzisches Kammerorchester Mannheim, the Talich Chamber Orchestra, Janáček Chamber Orchestra, Camerata Janáček, Musica Boemi, and the Pavel Haas, Bennewitz, Talich, Zemlinsky, Škampa, Wihan, and Wallinger Quartets among others. As a soloist and chamber musician, he has performed in concerts and international festivals in the Czech Republic and abroad including visits to Poland, Hungary, Germany, Slovak Republic, Austria, Norway, Sweden, Belgium, France, Spain, Italy, Holland and Turkey. In 1997, he recorded a CD of Concertos for two Clarinets and Orchestra (K. Stamitz, G. Ph. Telemann, J. G. H. Backofen) with Zbigniew Kaleta and the Janáček Chamber Orchestra. Apart from solo concerts and recitals, he often performs as a chamber musician in different ensembles. As a founding member of the Stadler Clarinet Quartet since 1994 he has regularly performed at home and abroad, recording a CD in 1999 – “Trygve Madsen – Live” for the Norwegian publisher MTG, and in 2006 “Stadler Clarinet Quartet – Live”. As a founding member of the Ensemble Moravia, he has recorded Chamber music by Bohuslav Martinů in association with the publisher Slovart, a CD of Hindemith, Berg, Schumann, Brahms for PRO Records label in 2007 and in 2013, a disc of Czech Music for Clarinet. In 2002, this ensemble won 1st prize at the International Chamber Music Competition “Marco Fiorindo” in Turin (Italy). Recently he has been studying period interpretation on chalumeau, baroque clarinets and classical clarinets (he is a member of the Lotz Trio, Collegium 1704, Musica Florea, Collegium Marianum, Ensemble Inégal, Tourbillon Ensemble, Oh! Orkiestra Historyczna or Terra Nova Collective). In 2002 he co-founded the successful annual International Interpretation Courses for Clarinet and Saxophone in Ostrava and has taught on this popular course ever since. He is also artistic director of the St. Wenceslas Music Festival. In addition to his concert activities, he teaches clarinet and chamber music as a Lecturer at the Faculty of Fine Arts of University of Ostrava. Igor Františák is an artist of Buffet Crampon, D’Addario Woodwinds and Gleichweit mouthpiece.