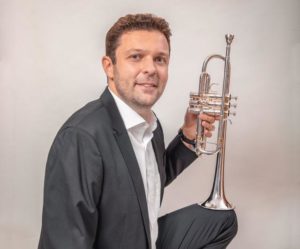 Guillaume Couloumy started trumpet with Bruno Gorce at Limoges Music conservatory where he got a first prize and a gold medal. He moved then to Germany and integrated the trumpet class of Professor Max Sommerhalder at the college of music Detmold. During this period he also worked with many important musicians and teachers like Reinhold Friedrich, Bo Nilson, Franck Pulcini, Hannes Läubin, Gabor Tarkövi. After his graduation in Detmold in 2002 he immediately won the audition for the academy of the BR Sinfonie Orchestra of Bavarian radio, Munich. In 2003 he won 3rd prize and the public award at the international competition of Munich ARD.