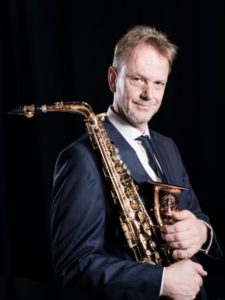 Classical saxophonist Arno Bornkamp is a unique figure in both the saxophone world and the Classical music world in general. In his career, now spanning nearly 40 years, he has amazed the music world of his energetic and stylish interpretations, full of lyricism and passion. He believes in the saxophone as an instrument with an infinite amount of nuance and colors, reflecting the human soul with all its shadings of light and dark. Bornkamp is a natural storyteller on his instrument, and offers a highly personal take in his interpretations of all the music he plays.
Bornkamp has given more than 200 performances as a soloist with orchestras all over the world. His repertiore spans from the standard repertoire for saxophone to new, often commisioned works. The ’Tallahatchie Concerto’ by Jacob ter Veldhuis ranks high in the latter category.
As a chambermusician Bornkamp has had long collaborations with his colleagues of the Aurelia Saxophone Quartet (1982-2017) and with pianist Ivo Janssen (1984-2019) . Now, a.o., he is playing in the Duo Calvadoré with the Flemish pianist Jan Lust.
Arno Bornkamp finds it essential to pass on his know-how to new generations of musicians, teaching at the Conservatory of Amsterdam where many of his students put his ideas into practice. He is also regularly invited to give masterclasses all over the world.
Arno Bornkamp has released dozens of CDs under his own name as well as with the Aurelia Quartet and in the context of other projects. His latest CD project is a solo CD with music by Johan Sebastian Bach, which has been released by the German label Genuin in February 2020.